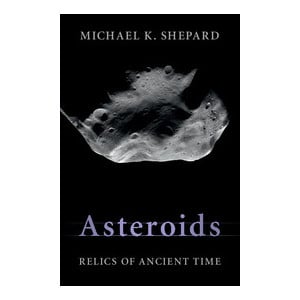 A popular level treatment of the field of asteroid studies, providing background material to people who want to know more about asteroids and their importance to society and science

Where do asteroids come from and what are they made of? What clues do they hold about the evolution of the Solar System? Scientists have catalogued hundreds of thousands of asteroids, and many are thought to contain water and amino acids, the building blocks of life.

Michael Shepard tells the fascinating story of their discovery, and what they can tell us about the history of our own planet. He describes how we find and study asteroids, what they look like through the eyes of powerful telescopes and spacecraft, and plans for future sample return missions. This timely book interweaves accessible scientific explanations with historical background and personal narrative, providing an engaging read for anyone curious about asteroids and what they may mean for our future - both as threats and opportunities.

The author Michael K. Shepard is a Professor of Geosciences at Bloomsburg University in Pennsylvania, specialising in radar asteroid studies.